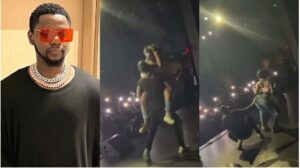 Popular singer, Kizz Daniel has revealed he has employed a female fan he rocked on stage during his live concert in New York.

Recall that the singer was on stage performing during his Afroclassic World Tour 2022’ in the United States of America when things took an unexpected turn as he went wild with one of his female fans onstage. 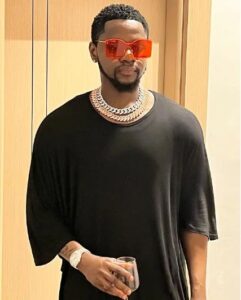 Kizz Daniel was captured in a video lifting the female fan and performing different sexual positions with her and this stirred wild cheers from the audience.

In a new development, the ‘Buga’ crooner, while speaking in an interview with Charlamagne Tha god and Angela Yee during “The Breakfast Club” show, disclosed that the lady he asked to send him a DM now works for him and she also came along with him to the studio.

When the interviewer asked if there was a sexual relationship between them, Kizz debunked such claims.

According to Kizz Daniel, they only have a business relationship.

Kizz went on to reveal that he doesn’t get intimate with his female fans on stage without their permission. He added that he always ensures that they are 18 years and above.

Watch him speak below: