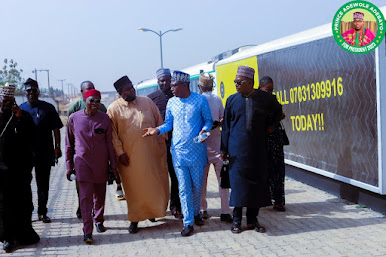 The presidential aspirant under the umbrella of the Social Democratic Party (SDP), Prince Adewole Adebayo has expressed sadness over the tragic accident at the Abuja-Kaduna rail yesterday.

According to reports, the attack led to the loss of lives of no fewer than two persons with several others injured, and hospitalized.
Adebayo expressed his feelings in a tweet he shared via his official Twitter page on Tuesday, where he also revealed that he had frequented the rail route in the past month, noting that the attack is “painful” and “revolting” to his soul.
“In the last one month, I have travelled on the Abuja-Kaduna rail repeatedly morning and night in company of my friends and associates.
“The tragic bombing or that railway and train with loss of lives and limbs and kidnappings is painful, tragic and revolting to my soul. I mourn,” the aspirant wrote.
It was gathered that suspected bandit terrorists detonated bombs on the rail track of Abuja-Kaduna train, successfully immobilizing it.
On Monday night, credible sources confirmed the attack to DAILY NIGERIAN, saying it took place between Katari and Rijana..According to one of the passengers who confirmed the incident over the phone, the attackers surrounded the train and began shooting sporadically.

“All the passengers are currently lying on the floor of the train. The bandits are shooting sporadically. We are in serious danger,” said on of the panic-stricken passengers.

There are at least 970 passengers onboard the train.