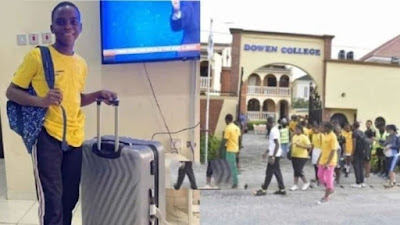 The names of teenage cultists gang that allegedly murdered innocent Sylvester Oromoni of Dowen College has been revealed by Gistlover blog.

Gistlover blog revealed this via it official Twitter page.
Recall that the 12-year-old Sylvester died after he was attacked by his fellow students who were trying to lure him into joining a cult.
The father also revealed that, his son was fed with a black unidentified liquid, and murdered.
According to Gistlover blog, the names are:
1.Michael Windoku Kashamu
2. Angel Temile
3. Favour Benjamin
4. Edward Brown
5. Agboro Emmanuel
A source noted that;
“Michael Windoku was a very stubborn kid he bullied his classmates but it was very light bullying because the school didn’t tolerate bullying at all or seniors dealing with annoying juniors. Teachers as well we’re prohibited from flogging children. I always dealt with him anytime I saw him bullying”
“Really rough kid I believe he was part. He recently told some of his former classmates he’s innocent. I’m still trying to get his contacts but I haven’t been able to” the source added
See the screenshot below… 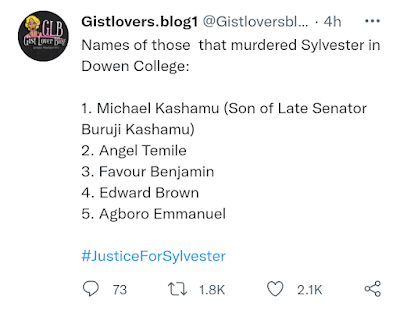