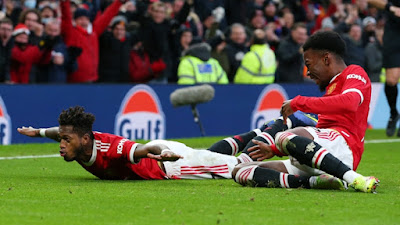 Manchester United started new manager, Ralf Rangnick’s reign with a 1-0 victory over Crystal Palace at Old Trafford.
United made a blistering start to their first game under interim manager Rangnick, but they were frustrated by a well-drilled Palace side for much of the game.
Alex Telles struck the crossbar before Fred’s clinical finish secured all three points for the Red Devils on Sunday.
Victory for United boosted their bid to secure a Champions League spot as Palace suffered their first defeat at Old Trafford for over four years.
United showed the intensity Rangnick demands from the start with a high-press approach and Telles flashed an early shot narrowly wide.
The Red Devils were relentless as they continued to pen Palace in, James Tomkins blocking a well-struck drive from Fred before Vicente Guaita denied Bruno Fernandes.
Patrick Vieira’s side weathered the storm but Diogo Dalot wasted a chance to open the scoring on the stroke of half-time, failing to hit the target when he let fly with his left foot from inside the penalty area.
United did not muster such a threat early in the second half and Rangnick replaced Jadon Sancho with Mason Greenwood just after the hour mark.
Telles clipped the top of the crossbar with a whipped free-kick from wide on the right and Jordan Ayew missed a glorious chance to put Palace in front from close range.
Fred produced the quality in the final third that had been lacking to send the United fans into raptures, finding the far corner with a measured right-foot finish from just outside the box.
United had a long wait for the breakthrough but they were good value for an elusive home win over Palace, who had won twice and drawn on their previous three visits to Old Trafford.
United now sits sixth on the Epl table, three points behind fourth-placed West Ham, while that is three defeats in a row for Palace.
United take on Young Boys on Wednesday their place in the last 16 of the Champions League already secured