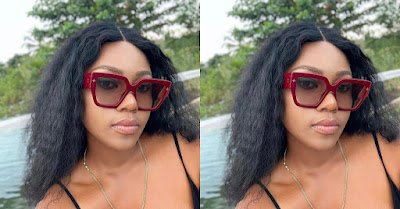 Beautiful Ghanaian actress, Yvonne Nelson has disclosed that she misses falling in love.
The problem with being a celebrity is one day they in love and suddenly they are out of love.
One of such celebrities is Ghanaian actress Yvonne Nelson.
Her most recent relationship with his British photographer sweetheart, Jamie Roberts, did not go so well. The duo do have a baby together anyway.
Well, it appears Yvonne Nelson is lonely and wishes to explore love again. Taking to Twitter, she wrote that she has missed falling in love.
See the screenshot below…

Below is a list of men Yvonne Nelson has allegedly dated:
Derek Boateng: It was rumoured that the actress once dated the Ghanaian footballer.
Jon Germain: He is a Ghanian singer and a media personality.
Chase: He is a Ghanaian musician.
Iyanya: Yvonne Nelson once dated the Nigerian music icon. We all expected it to end in marriage until it ended in tears for the actress.
Ice Prince: He is also another Nigerian musician that Yvonne was rumored to have dated. Both of them came out to deny it.
Davido: The DMW music gang was also said to have dated Yvonne Nelson secretly.