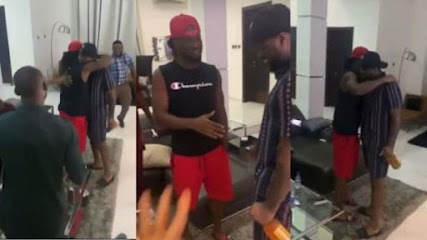 Popular Nigerian singers, Peter and Paul Okoye of the defuncts PSquare have finally reconciled and settled their differences after 5years of separation.
Recall that Peter and Paul Okoye followed each other on Instagram a few days ago which in turn sparked reactions among internet users.
However, in the video making the rounds on social media, the duo (Peter and Paul) reunited as they were spotted hugging each other after close to five years of being apart.
In a recent video that was shared by record label executive, Ubi Franklin, the brothers are seen together in the same room, shaking hands and embracing each other whilst wearing smiles.
It certainly can be deemed as the reunion of the year as for a very long while, their fans have anticipated the epic comeback of the P-Square brothers.
Watch the video below;