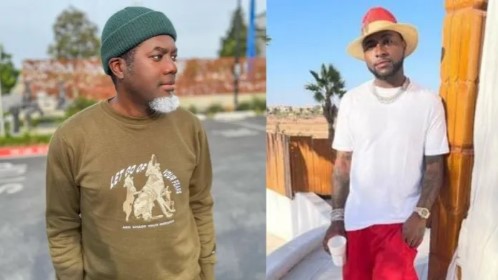 Nigerian lawyer and human rights activist, Reno Omokri has praised Nigerian talented singer, Davido for giving all the money (250 million Naira) he realized  from friends and well-wishers to orphanages in Nigeria.
Recall that Davido, a father of three shocked internet users as he added N50 million to the N200million he received as gift from his loyal fans for his upcoming 29th birthday, making N250 million which he donates to the orphanages.
Reacting to recent development, Reno Omokri heaps praises on the Davido disclosing that he is wiser than those who gave him money.
Reno Omokri added that human nature is vain as few people would have donated the N1m to orphanages who really need the money but donated massively to Davido who doesn’t need the money.
Taking to his Instagram page, Reno wrote;
“Davido is much wiser than all those who gave him monies on his birthday. He understands the spiritual realm and the ways of God. He has secured a soft spot in the Heart of the Creator, by virtue of James 1:27. I commend him. What a heart of Gold. What a man to watch for the future. Could his life trajectory be like Ronald Reagan’s? Those who gave to him are are different issue entirely. They should read Proverbs 22:16.”
In a follow-up post he wrote;
“To show you how vain human nature is, very few people will donate ₦1 million to orphanages, who really need the money. But they will fall over themselves to donate ₦1 million to Davido, who doesn’t need the money. Davido understood that. And did what he did. If he had asked them to donate to orphanages, you won’t see the deluge of Naira rain you saw.
“Davido showed a deep understanding of human nature. I personally believe that this was his intention all along. And I love how he added ₦50 million of his own money. That will show those who said that he was doing this because he is broke that they are the ones who are broke, both morally and financially. Bravo David Adeleke. Bravo!”
In another post, he wrote;
“Those people saying Davido only donated the money as an afterthought are very pathetic haters. Look at the calibre of people on the committee to disburse the funds. It would have taken days, if not weeks, to contact them and get their approval to serve on the committee. Those are not hungry people that you just call and incorporate them into such an effort lightly. This was a carefully thought out act of goodness.
“Accept it. Davido deserves universal commendation for this. Universal. Nobody, whatsoever, should cast aspersions on him. In our county, we have people who are ten times richer than Davido. And they have not done this. Let’s give honour to whom it is due!.”
See one of his post below…