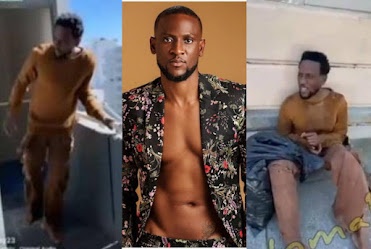 BBNaija reality TV star, Omoshola has reacted to his skinny and unkempt video that went viral saying he is not mad.

The BBNaija season 4 ex-housemate raised the alarm in a tweet via his official Twitter page, where he also explained that at a time he was going through some deep issues but he’s making headways now.
“I am not mad oooo 🤦.” Omashola tweeted as he shared video of the skit he was featured in.
A few days ago, Omoshola was seen in a video looking unkempt and his friend Ike Onyema raised the alarm of something being wrong with him but he can’t reach him because he’s not answering his phone and it was later gathered that it was a skit to create awareness for depression.
However, Omoshola thanked everyone who reached out to him or checked up on him one way or the other saying he’s overwhelmed by the love and support given him as he sincerely appreciates everything
“I want to use this medium to thank everybody who checked up on me one way or the other. I’m overwhelmed by your love and support and I sincerely appreciate it. I was dealing with some deep issues but I am making headways and better now by God’s Grace. Thank You 🙏❤️” he tweeted