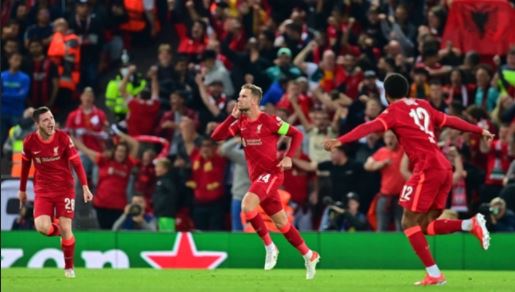 Liverpool got off to a winning start in the Champions League with a 3-2 win over AC Milan in a Group B thriller thanks to Jordan Henderson’s long-range stunner.
When Fiyako Tomori mistakenly placed the ball into his own net in the ninth minute of Milan’s first Champions League match since 2014, Liverpool appeared to be on their way to an easy victory.
The Rossoneri, on the other hand, have improved dramatically under Stefano Pioli, and after goalkeeper Mike Maignan saved a Mohamed Salah penalty, they took the lead late in the first half thanks to quick goals from Ante Rebic and Brahim Diaz.
Maignan kept Milan in the game when he dived to his right to keep out Salah’s spot-kick and then to deny Jota on the rebound.
Rebic leveled matters with a composed finish at the end of an intricate move, finding the bottom-right corner, and Diaz then tapped into an empty net to give AC Milan the lead.
Salah, on the other hand, made up for his miss from 12 yards by leveling the score 2-2 three minutes into the second half, and Henderson’s first Champions League goal in seven years guaranteed they came away with all three points from an entertaining encounter.
Henderson isn’t known for his goal-scoring ability, but in this encounter, he came up with a spectacular performance.
It was his first Champions League goal since November 2014, when he scored against Ludogorets, and it gives Liverpool the upper hand in a tricky group after Atletico Madrid and Porto drew 0-0.