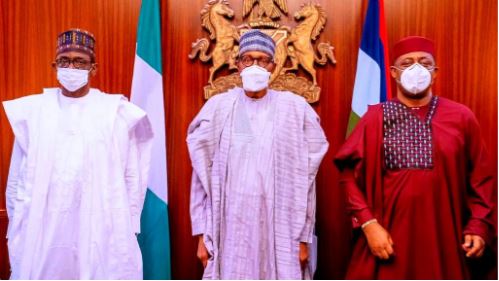 Peoples Democratic Party, PDP, stalwart Chief Femi Fani-Kayode (now APC member) has formally joined the ruling All Progressives Congress, APC.
The former Minister of Aviation during the President Olusegun Obasanjo government was presented to President Muhammadu Buhari by the Chairman, Caretaker Committee of the APC, and governor of Yobe State, Mai Mala Buni on Thursday at the Presidential Villa, Abuja.
Mr. Fani Kayode stated that he was guided by the Spirit of God in his decision and that he joined the APC to contribute to the country’s unity, noting that he is against or do anything that would lead to the country’s disintegration.
He revealed that he played a key role in the defection of three governors from the Peoples Democratic Party (PDP) to the APC.
Dave Umahi of Ebonyi State, Ben Ayade of Cross River State, and Bello Matawale of Zamfara State were the governors he cited.
He further claimed that he has friends from both parties and that he has been talking to the governors of Enugu State, Ifeanyi Ugwuanyi, Oyo State, Seyi Makinde, and Bauchi State, Bala Mohammed, on the possibility of joining the ruling party.
Recall that on October 21, 2018, Fani Kayode via his official Twitter page slammed his colleagues for defecting to APC, saying that they are doing so in other to avoid being persecuted by EFCC.
He referred to them as weak governors, stating that he will rather die than join the All Progressives Congress, APC.
In his words;
“I am not surprised that @MObanikoro and @iyiomisore have got their passports back from the EFCC and are now in America.
“I do not blame them for joining the ruling party to avoid persecution. Some are strong whilst others are weak. I would rather die than join APC or bow to Buhari.”