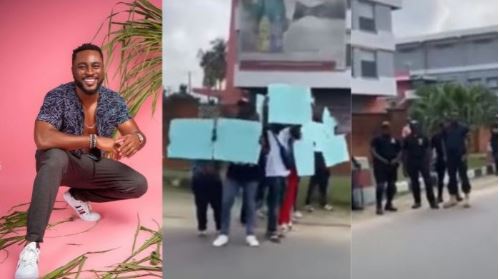 The fans of Big Brother Naija ‘Shien Ya Eyes’ housemate, Pere came out in mass in front of BBNaija gate to protest against what they termed an ‘unfair twist’ against their favourite housemate.
Recall that Pere and Angel were placed in a white room after being asked to leave the BBNaija house during the Sunday live eviction program.
They were then told that they would have to compete for the opportunity to return to the house.
However, Pere’s supporters felt this was an unjust twist, as the ex-US army officer, who received 25% of the vote, was able to advance to the finals ahead of Angel, who received 14%.
Pere’s supporters have vowed to stage a protest against the show’s harsh treatment of their favorite, saying that their votes must be counted.
Watch the moment Pere fans gathered in front of the BBNaija house after Biggie’s ‘unfair’ twist.