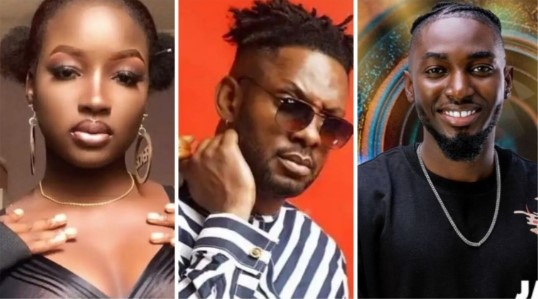 Big Brother Naija ‘Shine Ya Eyes’ housemate, Cross has accused his love interest, Saskay of flirting with other guys in the house.
Cross who seems to have been pretending not to be observing Saskay’s relationship with Jaypaul decided to speak out today.
He accused Saskay of flirting with JayPaul as he constantly sees her sleeping on his bed and even doing romantic things with him.
Cross, who seemed upset about the whole situation, stated that he has been offering her love and care but has not received the same love and care in return since she enjoys flirting around.
In an attempt to cover her tracks, Saskay also accused him of flirting with other female housemates, but Cross swiftly clarified that he is simply trying to be friendly to everyone.
In his words,
“The flirtation level is quite different. If you put everything on a grand scale, I’m not a flirt, I’m just being nice. You are more of a flirt than I am. I’m not as bad as you think I am and even if I’m bad as you think I am, you are badder. Yes, and that’s a fact, you are badder.
“You’re just finding a way to make it look like I’m the bad person here but you are the bad person here.”
Recall that Cross, during a lengthy conversation with fellow housemate, Peace, said Saskay is by far more beautiful than current Head of House, Maria.