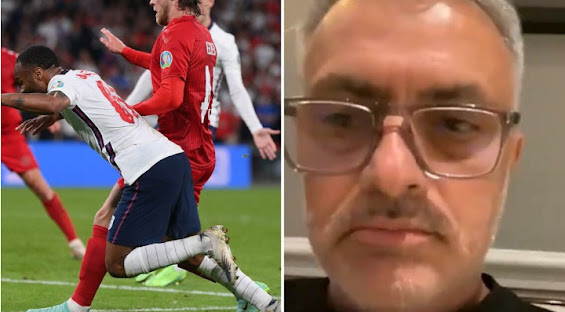 Former Manchester United, Chelsea and Real Madrid boss, Jose Mourinho has expressed shock over the referee’s decision to award England a penalty in their Euro 2020 semi-final triumph over Denmark on Wednesday night.
Mourinho claimed that the referee, Danny Makkelie, will have a restless night after awarding the penalty in extra time, but felt that England deserved to reach the final.
The men’s national team of England has not competed in a major final since 1966. Joakim Maehle was adjudged to have clipped Raheem Sterling by the referee, who pointed to the spot.
Although it was evident that Maehle made just minor contact with the Manchester City forward, VAR did not overturn the referee’s decision.
Kasper Schmeichel saved Harry Kane’s penalty, but he converted the rebound to give England a 2-1 triumph and end their semi-final drought.
Speaking to talkSPORT, Mourinho said;
“Yes, amazing game, but I’m not sure you want to listen to my opinion.
“But I say it the way I see it and I don’t believe the referee is going to sleep well!”
“I say the way I see it, not the way it is. Maybe you don’t like my opinion this time….
“It’s never a penalty. The best team won, England deserved to win. England was fantastic, but for me it’s never a penalty.
“But, for me, it’s never a penalty. At this level, a semi-final of a Euro I don’t really understand the referee’s decision.
“And I don’t understand even less the fact that the VAR didn’t bring the referee to the screen or overturn the decision. For me it’s never a penalty.
“But as a football man, I am disappointed that a penalty was given. I thought England would win it.
“The Danish team was really, really tired in extra time. The players were absolutely at their limits.
“I thought England would win in extra-time. As a football man I’m not happy with that penalty. I would prefer to win in a different way.”