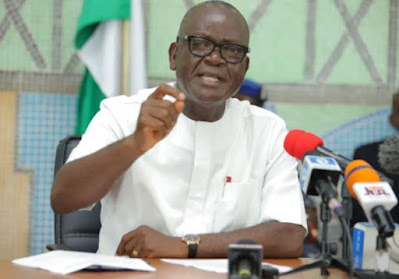 The Governor of Benue State, Samuel Ortom, has explained the reason why some governors elected on the platform of Peoples Democratic Party, PDP, are decamping to the All Progressives Congress, APC.
Ortom explained that it was mainly to avoid invitation by the Economic and Financial Crimes Commission, EFCC. As defecting to the ruling party would not save those who soiled their hands from rendering accounts and facing justice.
The governor made this assertion in Makurdi shortly after returning from Oyo State where he was invited to commission selected projects by Governor Seyi Makinde.
In his words;
“I have been in this game since 1982, which is close to 40 years now. So you always see all this drama. Some people are afraid of EFCC that is why they are decamping to APC. Recall that a former Chairman of the APC once said that if you decamp to APC your sins are forgiven.
“You know it left some of us having our people visit the EFCC because we have refused to do that kind of kangaroo forgiveness of sins. But I have always told my people to do the right thing.
“Some are running away from the PDP because they are afraid of the prosecution that is why they are running away from the PDP to APC.
“But we must all realize that there is no hiding place for any criminal or thief, that is the truth. All the eye service you see happening around when the day of reckoning comes nobody will stop the authority from fishing out whoever has committed a crime in this country.
“That is why I have always said that prevention is better than cure. I have resolved that I will better go back to my village as a farmer than get myself involved in anything that would be questionable.
“That is also why I try as much as possible to be decent in the handling of the finances and other things of government. So we are not disturbed. You will see what will happen when we get to 2022. I may not be a prophet, but I might be near it. So there is no cause for alarm.
“This is a democracy, people are free to associate with anyone they want but I can tell you that PDP is waxing stronger. One thing we are doing by constantly holding PDP Governors’ Forum Meeting is to reposition the party too. So that it will represent true democracy. “
Ortom stressed that Nigerians glamouring for a change in government in 2015 have now tasted the APC and have seen that the PDP was a better party.
He highlighted some key areas where the ruling All Progressive Congress (APC) has failed since taking over from the Peoples Democracy Party (PDP) in 2015.
“I believe in the saying that if you have not eaten the soup of another mother, you will think that your mother is the best cook in the world.
“Now Nigerians have tested APC and the basis for comparison is there. What was the exchange rate when the APC took over? What was the security situation when the APC took over governance in 2015?
“What was the economic status of this country, employment rates, education, and all sectors of this country when they took over in 2015? What is the situation today? If somebody sits down and does a thorough analysis of what used to be and where we are now, I don’t know what you will score the APC. I am sure it will be below average.
“They have not performed at all. And I am praying every day and I urge everyone to continue to pray but continue to work also so that we can surmount this. Remember that God cannot just come and turn things around it behooves us to do it. I believe in Nigeria,” he said 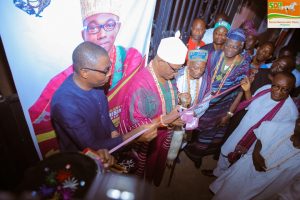