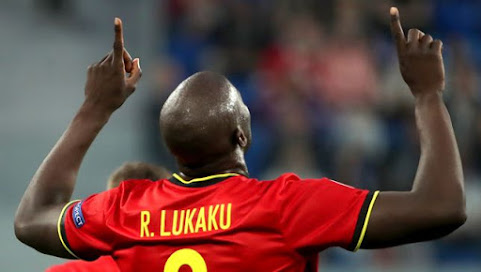 After Christian Eriksen collapsed during Denmark’s Euro 2020 game against Finland, Romelu Lukaku dedicated his inspired performance in Belgium’s triumph over Russia to him.
After falling to the ground late in the first half of Saturday’s Group B match at Parken Stadium, Denmark captain Eriksen was stretchered out of the field for emergency care.
His teammates formed a protective barrier around him while efforts were made to resuscitate him until he regained consciousness.
Lukaku wept as he watched the game, then went on to score twice in Belgium’s 3-0 victory over Russia later that day.
After putting the Red Devils ahead, the striker cried “I love you Chris” into a television camera.
“I’m really happy with the win but for me, it was difficult to play today because my mind was with my teammate, Christian.
“I hope that he’s healthy and I dedicate this performance to him.
“I cried a lot because I was scared. We lived strong moments together for a year and a half, I spent more time with him than with my family. My thoughts are with him, his girlfriend, his two kids, and his family,” he told beIN SPORTS.
Finland won 1-0 over Denmark after the first Group B game was restarted with the final five minutes of the first half played before a shortened halftime break.
The match was completed “upon the request of both teams’ players,” according to UEFA