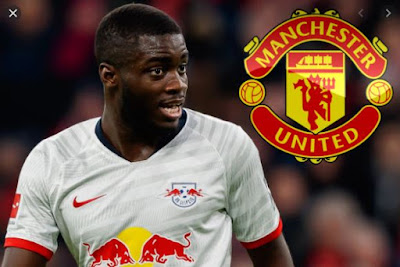 RB Leipzig’s powerhouse defender, Dayot Upamecano has finally revealed the main reason why he rejected a move to Manchester United.
The 22-year-old defender claimed he turned down an opportunity to join Manchester United as a teenager because Ralf Rangnick presented such a persuasive alternative.
Upamecano who will leave RB Leipzig to join Bayern Munich at the end of this season was targeted by United as a teenage prospect when he was with French club Valenciennes.
He elected to turn down United and move to Austrian club Salzburg, Upamecano says, after being wowed by Rangnick’s precise vision for his career.
At the time, Rangnick was sporting director for Salzburg and Leipzig, with both clubs part of the Red Bull empire, and talking Upamecano into a move proved one of many successes he achieved in that role.
“I was a young boy. I wanted to sign for them straight away. Manchester United! But then my parents took me aside and said: ‘Let’s think carefully about this.
“We thought about it for a long time and then decided that going ‘step by step’ was the best option for me. Everything Ralf said came true,” Upamecano said
Upamecano was loaned out to Liefering before returning to make an impact with Salzburg while still in his teens, and at the age of 18, in January 2017, he was moved through the ranks to join Leipzig.
Rangnick, who had already enjoyed one spell as head coach of Leipzig, returned for another in 2018, and Upamecano said;
“Ralf was the most important coach for me. He’s a professor, a scientist of football, and he also cares about everything. He’s always there for you with advice on matters football and non-football, every single day.”
Before joining Bayern, Upamecano has the chance on Thursday to land a DFB-Pokal title with Leipzig, but eventually lost it to Borussia Dortmund 4-1.
Julian Nagelsmann, who succeeded Rangnick in 2019, has been another major influence on the career of Upamecano, who describes the 33-year-old as “an unbelievable manager”.
Like Upamecano, Nagelsmann will also move to Bayern at the season’s end.