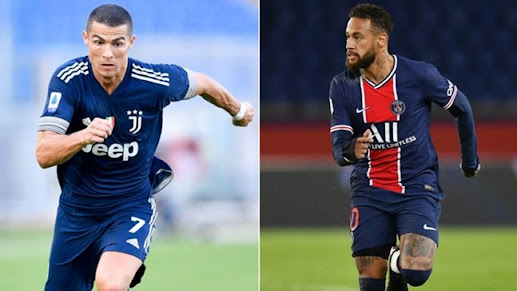 Brazilian and Paris Saint-German’s superstar, Neymar Jnr has revealed that he would like to play alongside Juventus star, Cristiano Ronaldo as he has already played with Barcelona star, Lionel Messi.
The 29-year-old Brazil international said this as speculation over Cristiano Ronaldo’s future at Juventus intensifies.
Ronaldo, who reached 100 goals for Juventus during Wednesday’s 3-1 win at Sassuolo, has been tipped to leave the struggling Serie A giants at the end of the season.
The five-time Ballon d’Or winner has been linked with Paris Saint-Germain, and former clubs Manchester United and Real Madrid.
PSG star Neymar, who recently signed a new contract with the Ligue 1 champions talked up a partnership with Ronaldo, having played alongside Barcelona’s great Lionel Messi.
“I want to play with Cristiano Ronaldo,”  Neymar told GQ.
“I have already played with great players, like [Lionel] Messi and [Kylian] Mbappe, but I haven’t played with Cristiano Ronaldo yet.”
Neymar is contracted to PSG until 2025 following his new deal in the French capital.
The forward joined the Ligue 1 champions from Barcelona on a five-year deal at a world-record cost of €222million in August 2017.
Neymar’s new terms will reportedly see him earn €30m (£26m) per season in Paris, where he has scored eight Ligue 1 goals this season and 16 across all competitions.