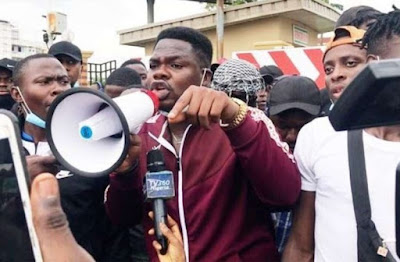 Nigerian comedian, Debo Adebayo, popularly known as Mr. Macaroni has revealed how #EndSARS protesters were molested by the Nigerian police at the Lekki Toll Gate, claiming that they were stripped naked.
Macaroni and several others were, on Saturday, arrested by the police for protesting against the decision of the Lagos State Judicial Panel of Inquiry to reopen the toll gate, which was symbolic of last October’s #EndSARS protests. They, were, however, granted bail.
In a video posted on his Twitter handle, Mr. Macaroni narrated how he and other peaceful #EndSARS protesters were wrongly treated.
He said;

“When we were picked up, we were taken to Adeniji where we were beaten, we were stripped naked. Every one was beaten.”

The comedian explained that he initially did not want to go for the protest as he had been warned by his family, but noted that he changed his mind because people will be at the Toll Gate.
He claimed that his phone was also destroyed after he was arrested by law enforcement agents.
He said:

Mr. Marcaroni’s lawyer, Mike Ozekhome has said that the arrest and humiliation of protesters at the weekend is unlawful.
He, however, noted that he has not been briefed by his client to sue the police authority.
Ozekhome said:

“The arrest of my client, Mr. Marcaroni, and many other protesters at the Lekki tollgate at the weekend is unlawful and actionable in court.
“My client has not briefed me on whether he wants to institute any suit against the police, but I know for a fact that his unlawful arrest is a breach of his right which is guaranteed by the constitution.”

Watch the video below;