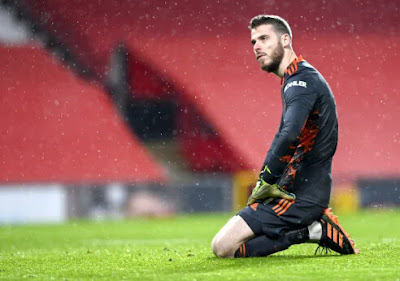 Manchester United’s legendary defender, Gary Neville has said that is former club needs to sign a new goalkeeper if they are to challenge for the title.
United’s No1 shot stopper, David De Gea was criticised for his performance in the draw with Everton at Old Trafford.
David De Gea was in the spotlight with a couple of blunders in the 3-3 draw with Everton last weekend, and Neville feels United need to head off further problems by making a raid on the market for a goalkeeper of the highest class.

“We have to start asking questions about David De Gea, of course we do.
“The mistakes are coming more regularly and they cost points. And the game-winning saves and one-on-one saves are coming less,” Neville says

Neville is convinced that if Pep Guardiola or Jurgen Klopp were to be hired by United, they would quickly request for the club to bring in a top goal keeper to replace De Gea

“If Pep Guardiola or Klopp came in to Manchester United in six months’ time, they would bring a new goalkeeper in.
“That might be tough on Henderson, but to chance it – do you gamble with winning the league? That’s the first question, is the keeper right? That’s number one, deal with the ‘keeper situation.
“Your goalkeeper, to win a league, has got to be exceptional,” he added

The question now is if it’s too soon to write De Gea off? Though he has made more mistakes than in previous seasons, but Liverpool star Alisson was seen as the best goalkeeper in the league and has been castigated for errors in the Reds’ past two games.
De Gea has three months to reestablish himself as one of the best goalkeepers in the league.
If he fails to do so, then Red Devils boss Ole Gunnar Solskjaer will have justification in making a change.