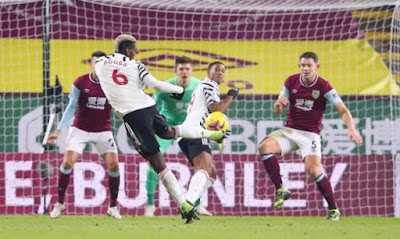 Manchester United is now sitting top of the English Premier League table for the first time in three years, thanks to Paul Pogba’s deflected volley against a stubborn Burnley side.
United currently leads defending leaders Liverpool by three points, as they set for a top-of-the-table clash at Anfield on Sunday.
In spite of the continuous speculation over his future at the club, Pogba has played an increasingly important role in United’s first genuine title challenge since Alex Ferguson retired in 2013.
The signing of Bruno Fernandesnot long after Burnley won 2-0 at Old Trafford nearly a year ago in the last meeting between the sides has transformed United’s attacking trait.
Also, on the off chance that Pogba can produce consistent displays worthy of the then world-record fee United paid for his service in 2016, there is a reason for United Boss Solskjaer to believe he can end the club’s eight-year wait for a league title.
For United to beat a Burnley side that had not lost at home since October also indicates that United has the capability to grind out a result when they need to.
United had a goal harshly ruled out by the referee when Harry Maguire powered home a header at the back post as he was accused of a slight nudge on Erik Pieters.
The Red Devils increased the pressure in the second-half as Cavani, back from a controversial three-game ban, missed two major opportunities he would expect to take.
Pogba was controlling the game from midfield until he finds himself in an open position when his volley from Marcus Rashford’s cross deflected into the net.
Burnley had opportunities to level late on as Eric Bailly redirected Matej Vydra’s shot only wide before Maguire got away from claims for a penalty for handball.
However, United hung on to the final whistle as a big boost ahead of the trip to Anfield.