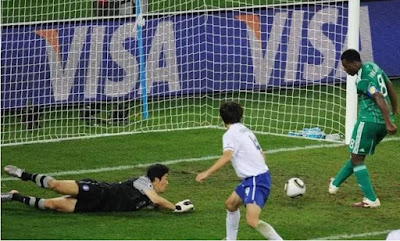 Former Super Eagles of Nigeria striker, Yakubu Aiyegbeni has once again reacted to his 2010 World Cup open goal miss against South Korea, saying he has no apologies to render to Nigerians.
Yakubu said this during an interview on NationTV On Wednesday, January 27, where he added that apart from missing the goal he had sacrificed and scored lots of goals for the National team and no one apologized to him.
He also said that it wasn’t a deliberate miss, therefore he will not apologize to anyone.
Recall that the former Everton of England hitman failed to convert a goal from a close range during Nigeria’s match against South Korea in the 2010 FIFA World Cup held in South Africa.
The miss, if it had ended in the back of the net, would have sent Nigeria to the next stage of the competition as they have previously lost to Argentina and Greece
In his words;

“I won’t apologize at all. Why should I? I have scored so many goals for Nigeria too. I have sacrificed a lot for the country. Did anyone apologize to me?
“I cannot apologize because it wasn’t a deliberate miss. I seriously wanted to score. But it wasn’t to be. So many have strikers have missed chances too and nobody will apologize so I won’t.”

South Korea was leading Nigeria 2-1 at the time, then the famous miss happened in the 66th minutes when Yakubu found himself just 4 yards away from the goal and he fired wide.
Although, he later scored a penalty to level the scoreline. A win for Nigeria would have sent them to the round of 16 instead of being eliminated.