Today marks 100 days since the Lekki Toll Gate massacre, and Nigerians have taken to social media to remember those that lost their lives during the fight for justice, saying they will never forget.
Recall that on Tuesday 20th October 2020 Nigerian soldiers were alleged to have shot live bullets at unarmed, peaceful protesters at the Lekki Toll Gate while they sang the country’s national anthem.
It was said that the peaceful #EndSARS protesters were waving the Nation’s flag while singing the national anthem when nonstop gunshots were opened on them.
Many peaceful #EndSARS protesters lost their lives in the process as they demand justice against police brutality and injustice going on in the country.
Some names of those that died in the process were also listed as Nigerians thanked them for laying down their lives for a greater course.
See reactions below;
“The peaceful, unarmed protesters at Lekki Toll Gate, whom Nigerian military shot live rounds of ammunition at; 20-10-20. They were waving the flag, singing the national anthem when a nonstop fire was opened on them
“They continued singing … Broken heartBroken heart”
“For everyone killed at the Lekki Toll Gate by the people supposed to protect them while they sang our country’s national anthem!
“Today makes it 100days. We will never forget it. We would never forget you.”
“I’ve interacted with many protesters who were injured at Lekki Toll Gate, plus friends/families of the dead. None of them is a hoodlum as Lai Mohammed keeps saying.
“Soldiers/policemen gunned down some of the country’s most patriotic souls for no reason. And in a democracy”
“It is 100 days after the Lekki Toll Gate Massacre.
Not one soldier arrested.
Not one general interrogated officially.
Not one govt official held responsible.
Not one Nigerian army head held accountable.
Young people shot, injured, killed.
This will never ever be okay #EndSARS”
“We will never forget 20-10-20 at Lekki toll gate… 100 days since #LekkiMassacre…
“We will never forget every person that supported the truth during the #EndSARS protest. You’ll live in our hearts.”
“I still cannot believe that the government or someone in government authorized the killing of unarmed peaceful protesters at the #endsars protest at Lekki toll gate.
The thought is very chilling, and yet, it happened.”
“Today makes it 100days since Nigerian youths were killed at Lekki Toll Gate, we are still asking Who ordered the shooting at Lekki Toll Gate? #EndSARS”
“Today marks 100 days since the Lekki Toll Gate shooting and the fight for justice isn’t over. I am joining @AmnestyNigeria in demanding an end to police violence once and for all! JOIN and TAKE ACTION here: http://amn.st/6009HbFRZ Flag of Nigeria #EndSARS”
See photos below; 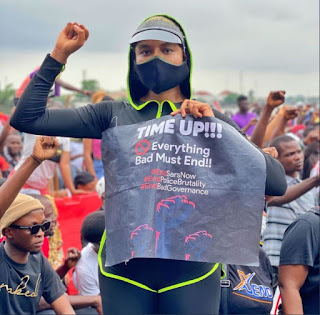 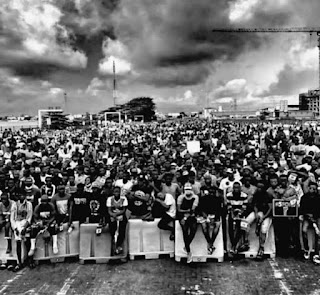 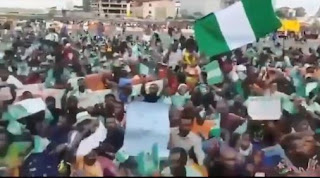 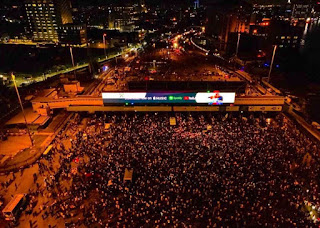 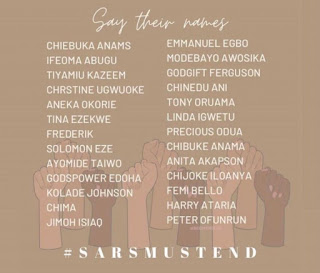 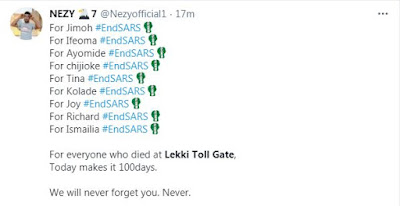