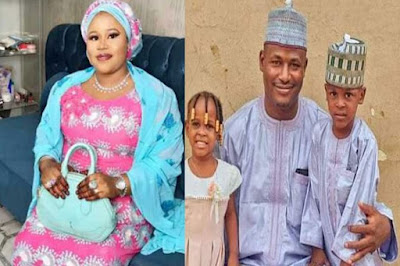 The 26-year-old Nigerian woman who was alleged to have killed her two children with a machete in the northern part of the country has finally opened up on what triggered her action.
The suspect named Hauwa Habibu, blamed the evil act on hallucinations and paranoia, saying that she hallucinates a lot and her husband is aware of the fact, but he never believed her.
Mrs Habibu was arrested on October 4, after murdering her 6-year-old son Yusuf, and her 3-year-old daughter, Zuhura and also inflicted severe injuries on her 10-year-old niece, Aisha Sadiq at Diso Quarters, Gwale local government area of the state.
When speaking to the journalists at the command headquarters in Kano, Hauwa who expressed shocked that she killed her own children with her bare hands said she hallucinated again and this time she saw her little children with knife and other weapons coming to attack her.
Her words…

“I am not even aware I killed my children. I saw my son and daughter attacking me with a knife and another weapon. I called my husband and told him what was happening but he didn’t believe me. So I locked the house and escaped to my mother’s house for safety. The next thing I know was my husband coming to my mother’s house with bloodied clothes saying I killed the children.”

The suspect added that she had been mentally ill for a long time, and sometimes she sees her husband transforming into a beast with hooves instead of legs.

“I used to feel I was being pursued. I even hallucinate a lot but my husband never believed me. Even he himself, I used to see him transforming into a beast with hooves instead of legs,” she claimed.

Hallucination is an act of experiencing a seemingly real perception of something not actually present or real, typically as a result of a mental disorder, taking of drugs, or by reaction to certain toxic substances, and it usually manifest as visual or auditory images.