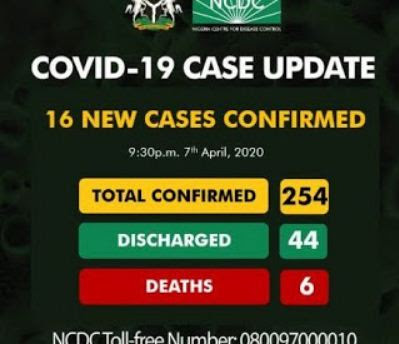 The Nigeria Centre for Disease Control (NCDC) has released a fresh update on the number of confirmed cases of coronavirus recorded in Nigeria.
The health management centre on Wednesday night announced that Nigeria recorded sixteen new cases of COVID-19, with 10 cases reported in Lagos State.
According to NCDC, out of the 16 new cases recorded, ten confirmed cases were reported from Lagos State, two cases in Abuja, two in Oyo, one in Delta, and one in Katsina.
See also: How COVID-19 Patient Died In Our Custody – LUTH Explains
This brings the total number of confirmed cases in Nigeria to 254, 44 infected patients have so far been treated and discharged, and 6 deaths cases confirmed.
See also – What I Have Learnt During My Isolation Period – Seyi Makinde
Even with the federal government directive to shutdown some states in the country, the total number of confirmed cases keeps increasing across the country.
Details Shortly….