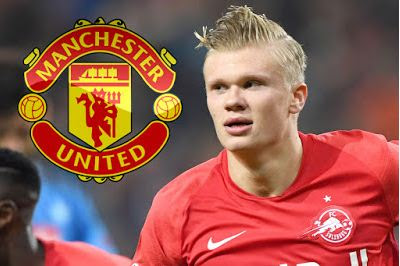 Manchester United could be set to land the most sought-after striker in Europe after he reportedly told Solskjaer he wants move.
According to report reaching MackenzieSkyBlog, Salzburg striker Erling Haaland has identified the Red Devils as his preferred choice from a long list of suitors containing Juventus, Liverpool, Borussia Dortmund and RB Leipzig.
The teenager met with the two Bundesliga clubs in midweek, but United appear to have moved to the front of the queue.
MackenzieSkyBlog  gathered that Haaland has told United manager, Ole Gunnar Solskjaer that he wants to move to Old Trafford, according to the Mirror.
United have been linked with the 19-year-old for several months and the Norwegian connection could lead him to the Premier League.
However, Haaland’s high-profile agent Mino Raiola reportedly wants to keep all options on the table as the January transfer window moves nearer.
The striker’s father, Alf-Inge, was said to have visited United’s training ground in November, while Haaland held talks with Bundesliga teams Borussia Dortmund and RB Leipzig this week.