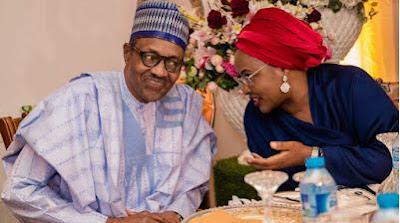 Aisha Buhari, the first lady of the Federal Republic of Nigeria says she don’t get to have pillow talk with her husband President Buhari.
She said this while featuring as a guest on a programme aired on Television Continental, Journalists Hangout.
Aisha, who spoke to the journalists via telephone, noted that busy schedules denied her of the opportunities to have pillow talks with the retired major general.
She said this when asked why she expresses her views on national issues in public instead of doing so during pillow talk.
Aisha said;

“There is no pillow in the villa. No, because we are always busy listening to one story or another. I think the people he puts in the cabinet, they should just sit up and do the needful. That is why it is not good to have godfather-ism.
“We just have to choose the right people to be at the right places so that we would rest, so that the first lady should stop talking.”

She, however, vowed not to stop expressing her views in the public, saying nobody would stop her from doing so.
When queried if she was ever asked to stop talking in the public, Aisha said,

“Who will stop me? Everybody is talking in the country; nobody is stopping me.
“Nigerian people believe in my husband’s ideology and he fought for it for 12 years. When we got to this place, it is not because we are the richest or educated or handsome.
“We are there (Aso Rock) due to the trust and confidence that they have in us. So, I feel indebted to the Nigerian masses to continue defending them as the wife of the president.”