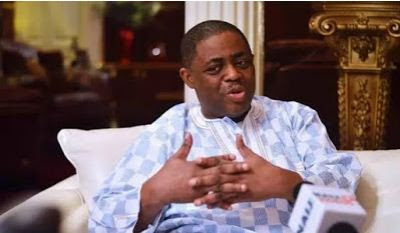 Former Minister of Aviation, Femi Fani-Kayode has come out to respond to Danjuma’s claim that Yorubas leaders have become scared and voiceless over events in the country.
He admitted that it was true that some individuals from Yorubaland have become traitors and no longer talk about the happenings in the country.
He accused the All Progressives Congress (APC) national leader, Bola Tinubu and Vice President Yemi Osinbajo as among those that have lost their voices on national matters.
Danjuma had on Thursday during a launch of a book by the Nigerian Tribune in Ibadan, Oyo State, said that;

“In Yorubaland, everybody seems to have lost their voice, scared. People appear not to care about what is happening. If I tell you what I know that is happening in Nigeria today, you will no longer sleep.
“If you want details, I will give it to you privately. We are in a big hole as a nation.
“And people who put us in this hole have continued today. So, we have to wake up.
“Only we can save ourselves. The fifth columnist activities going on among your people are not helping matters. May Almighty God continue to bless this country. But only we can save ourselves from ourselves.”

Fani-Kayode, responded to Danjuma this via his verified Twitter handle, where he said that:

”I am not a Yoruba but an Anago. I am a proud son of Oduduwa. I appreciate General T.Y. Danjuma’s contribution but he is wrong about one thing: not all the Anagos and sons and daughters of Oduduwa have ‘lost their voices.
“I have done so at great cost to myself and so have Baba Ayo Adebanjo, Ayo Fayose, Gani Adams, Gboyega Adejumo, Deji Adeyanju, Yinka Odumakin, Dino Melaye, Baba Fasoranti, Akin Osuntokun, Bishop David Oyedepo, Rev. Samson Ayokunle, Prophet T.B. Joshua, Segun Mimiko, Seyi Makinde, Babatunde Gbadamosi, Afenifere, Yoruba Summit Group, OPC, President Olusegun Obasanjo and lately Omoyele Sowore, Femi Falana, Tunde Bakare, Professor Wole Soyinka and so many others.
“I agree that there are some traitors like Bola Tinubu, Yemi Osinbajo and others in our midst but they are a decreasing minority who are bound up and lost in their own slavish servitude, inexplicable greed, grave delusions and morbid fears.
“To them Buhari is a God but to us he is nothing but a tin pot dictator with feet of clay. To them the Fulani are to be worshiped and were born to rule but to us they are no better than any other ethnic nationality in Nigeria and we did not come into the world to be their slaves.
“For the last 5 years many of us have been as constant as the northern star, have refused to collaborate and have never lost our voices.”

The former minister also asked Danjuma not to hold back anything and speak about his supposed secret that would make Nigerians loss sleep, before it’s too late or he should forever remain silent.

“Would someone pls tell Gen. T.Y. Danjuma that if he wants to talk he should talk! Nigerians have already lost their sleep! We are already a vassal state being run by crude barbarians and we have nothing to lose. He should talk now before it is too late or forever hold his peace!,” Fani-Kayode said.