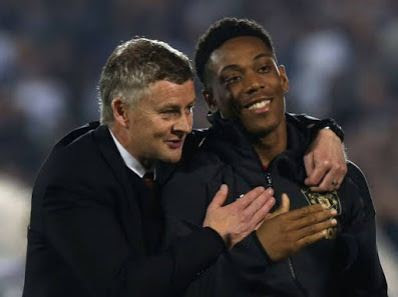 Manchester United Coach, Ole Gunnar Solskjaer firmly believes Anthony Martial can deliver more than the striker Manchester United have been advised to sign.
United cruised to a comfortable 3-1 away win at Norwich city. Thanks to goals from Mc Tominay, Macus Rashford, and Anthony Marshal.
Former captain Roy Keane advised United to “go and get” Tottenham star Harry Kane but, in the fit-again Martial, manager Solskjaer feels he already has the solution.
Solskjaer told Daily Mirror:

“I’ve heard what some people have said about us being short of a genuine number nine, but Anthony has absolutely everything in his locker to take that role.
“He can be a target man, he’s quick, he’s technical, and one of the reasons he wanted to stay here was because I told him I saw him as a central striker.
“I don’t think people outside the club realize how good this lad is, but the players in the dressing room know.
“When we are talking about how we are going to score goals, they say, ‘We will just give the ball to Anthony.
“He has the confidence of his team-mates and his manager because we see him every day in training.”

Martial’s decisive spot-kick in Serbia capped a welcome to the return to the starting XI following a problematic thigh strain.
The 23-year-old French forward scored the winner against Partizan Belgrade in the Europa League and also scored a brilliant chip at Norwich to make it 3-0 for the Red devils.
Solskjaer said:

“People have the wrong idea about Anthony. He is a lad who enjoys life and always has a smile on his face. I know some people will be surprised by that because he is always being criticised for having poor body language.
“But he is happy again. He always wanted to be Manchester United’s number nine and he’s got his number back. We’ve missed him for the last eight weeks.
“We hoped to have him back earlier and he was so desperate to play that he really pushed his recovery and ended up having a small recurrence.”