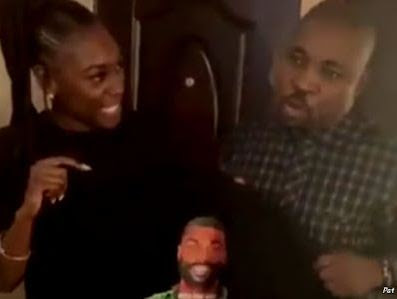 Big Brother Naija finalist, Mike Edwards has gotten an endorsement to be voted for, as Lagos State Chief of thugs MC Oluomo recommends him to lagosians. Thanks to Mike’s wife Perri.
The wife of BBNaija finalist Mike, Mrs Perri, who entered Nigeria today for the first time to cheer her husband up as he compete for the BBNaija N60million crown, has met with MC Oluomo in his house in Lagos to get his endorsement so that Lagosians will vote for her dear husband.
The joyous and intelligent wife was seen in a video with MC Oluomo holding a black T-shirt with Mike’s face inscribed on it.
In his part, MC Oluomo urge the people to vote for his friend Mike because of his efforts to sing Teni’s song.
He said;

”My people, please vote for Mike because he tried learning Teni’s song (Case) ‘I go go oshodi for your case, I will tell Mc Oluomo’. Vote for Mike, He’s my friend.”

The reality TV show ends on Sunday and the lucky winner with the highest votes (between Mike, Mercy, Frodd, Omashola, and Seyi) goes home with N60 million Naira and lots of other gifts.