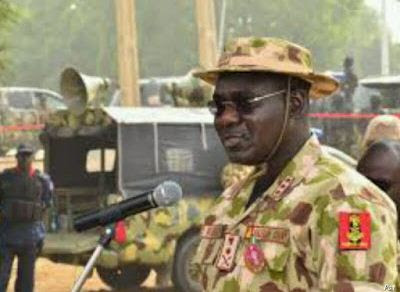 The Nigerian Army has announced a change in name of it proposed internal security exercises, Operation Python Dance IV in the South East region of Nigeria from ‘Egwu Eke’ to ‘Atilogwu Udo’.
It is to be recalled that IPOB had earlier told the FG to cancel it planned military security exercise in the southeast region, saying that the region is presently in peace and the activity should be directed to the north instead.
See Also: IPOB Tells FG – Redirect Military ‘Python Dance IV’ To The North, The Southeast Is Peaceful
The Nigerian Army Operations Media Coordinator, Col Aminu Iliyasu, in a statement said the Operation Python Dance ‘Egwu Eke’, which covers the South East region of the country will now be called Atilogwu Udo.
The statement read:

The Exercise, which covers the South East region of the country, is designed to combat criminal activities including kidnappings, armed robbery, inter-cult and communal clashes among other sundry crimes.
He added:

“All other information relative to the Exercise as contained in the previous Press Statement and Press Conference issued by the Army Headquarters remain unchanged.
“The Chief of Army Staff Lieutenant General Tukur Yusufu Buratai wishes to reiterate the commitment of the Nigerian Army in protecting lives and properties of citizens particularly during these ember months and the fast approaching Yuletide season.
“He also wishes to further solicit the support and understanding of all well-meaning Nigerians towards providing a well secured environment for all and sundry.”