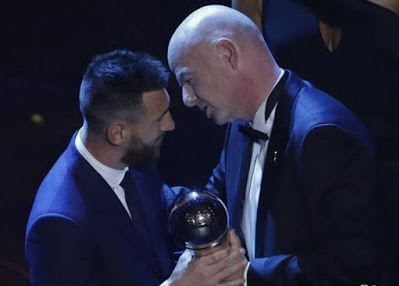 Lionel Messi has beaten Juventus Cristiano Ronaldo and Liverpool Virgil van Dijk to win the Best FIFA Men’s Player award for 2019.
The Barcelona and Argentina superstar came second behind Ronaldo in 2016 and 2017, before missing out on the top three altogether last time around.
A five-time winner of the Ballon d’Or, Messi now has six FIFA awards to his name overall and was honoured for guiding Barcelona to the LaLiga title in 2018-19 season, scoring 36 times in 34 outings.
He suffered semi-final heartache in the Champions League at the hands of Liverpool, who went on to win the European title.
That success contributed towards Van Dijk being named UEFA’s Men’s Player of the Year last month, but Messi prevailed on this occasion and all eyes will now be on where the Ballon d’Or lands.
In his acceptance speech at Monday’s ceremony in Milan, Messi said:

“I want to thank you. For me, the individual prizes are secondary, the important thing is the collective.
“But I have my wife and two of my children sitting there.
“They don’t know whether to greet or ask for photos from such extraordinary soccer players. Thank you all very much.”

He was unable to add the Puskas Award to his haul, though, with Daniel Zsori’s spectacular overhead kick for Debrecen against Ferencvaros voted the best goal of last season ahead of Messi’s wonderful chip for Barca versus Real Betis in LaLiga.
Messi’s only Barcelona team-mate who joined him in the FIFA FIFPro Men’s World11 was Frenkie de Jong, who earned the distinction on the back of his performances for Ajax last term.
Ronaldo and Kylian Mbappe joined Messi in the front three and Liverpool were represented by Van Dijk and Alisson, while their manager Jurgen Klopp was named Best Men’s Coach.