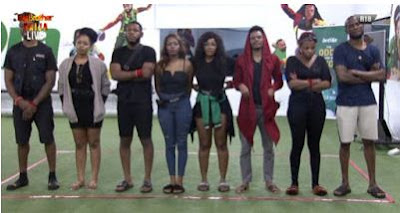 Big Brother Naija 2019 housemates, on Monday, nominated fellow housemates for possible eviction this week Sunday.
Earlier today, after Big Brother announced Ike and Mercy as winners of the Head of House challenge, he changed the nomination process.
It was a big surprise to Tacha that she was not among the housemates that were up for eviction for this week as no housemate mentioned her name during the nomination process.
Here is how the housemates voted:
However, Seyi, who won the veto power card, saved and replaced himself with Khafi.
The outcome means any of Venita, Elozonam, Frodd, Khafi and Omashola could go home on Sunday.