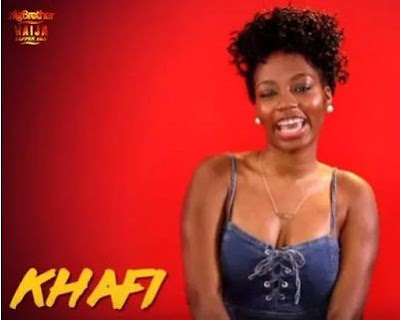 BBNaija 2019 housemate, Khafi may be sanctioned for participating in the ongoing reality Tv show without the authorization of the British Police.
MackenzieSkyBlog  gathered that although Khafi had applied for permission to feature in the show but didn’t receive approval before jetting out to participate in the BBNaija 2019 reality show.
We understands that Khafi Kareem works as a Metropolitan Police Officer with the British Police and was told not to participate in the on going Big Brother Naija show.
According to The Sun, Scotland Yard will subject the 29-year-old Khafi to an internal investigation process over her decision to participate in the reality TV show.
A Met spokesman said last night:

“The Met is aware that the officer has since appeared on the show without authority.
“The Directorate of Professional Standards has been informed and will be carrying out an investigation into the circumstances.
“The Met does not support the officer’s appearance nor does she represent the Met whilst appearing on the show.
“All officers have a duty to behave with professionalism and in a manner that does not bring the Met into disrepute whether on or off duty.”

The force in a statement revealed that she could face misconduct proceedings if found to have breached police standards of professional behaviour.

“Those who do not behave professionally risk breaching police standards of professional behaviour, and may be dealt with by way of misconduct proceedings,” the Force stated.

In a similar vein, one of her colleagues also said the BBNaija star was denied permission to participate in the reality TV show and she didn’t obey the authority’s decision;

“She’s a serving British police officer, it’s outrageous. She asked permission to go on the show but, when her request was refused, she went anyway.
“Other officers working with her are furious that she can just disobey orders and tarnish the reputation of the force,” she said.