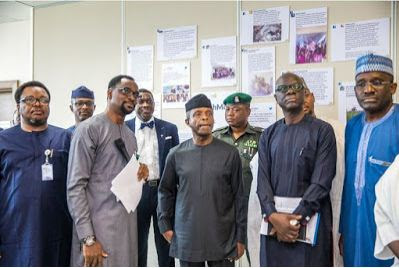 There is tension among some workers in both private and government organizations over an alleged investigation on the N-Power scheme
According to Concise News, some of these workers are under the payroll of N-Power, a scheme meant for unemployed graduates in teaching, agriculture etc.
Some of the workers who are getting the N30,000 monthly stipend from the scheme are employees of the Police Force, Road Safety, Civil Defence, Doctors and Health workers, State and Local Government workers among others.
They were detected via their Bank Verification Number (BVN) with thousands of persons involved in the illegal act.

“According to information reaching us, there are a lot of workers involved and the information is authentic,” a source told News Direct.
“We have report that federal government workers collecting stipend belong to unemployed graduates. We have police that are also involved.
“Interestingly, we have people in private companies that are also benefiting from Npower which the programme is not meant for.”

The source added that the team at Npower has discovered these people through the use of BVN traced to their monthly salary account.

“Officials of Npower are still investigating the scam as I’m speaking with you,” the source said

However, when reached, the Presidential Aide on Job Creation and Youth Employment Mr. Afolabi Imoukhuede described it as “Fake news, nothing as such from us. It’s fake news,” he said with the spokesperson of the Economic and Financial Crimes Commission (EFCC), Orilade Tony, saying he is not aware of such a development.
Orilade, however, assured that the anti-crime agency will dig deeper into the matter at stake.
In a related development, report reaching Mackenzieskyblog heard it that some beneficiaries of the federal government empowerment scheme who were “secretly” disengaged will stage a peaceful demonstration in Abuja, Friday, July 5th, 2019.
The affected beneficiaries told this news medium that the demonstration is part of measures to get the attention of the government and Nigerians to their plight.